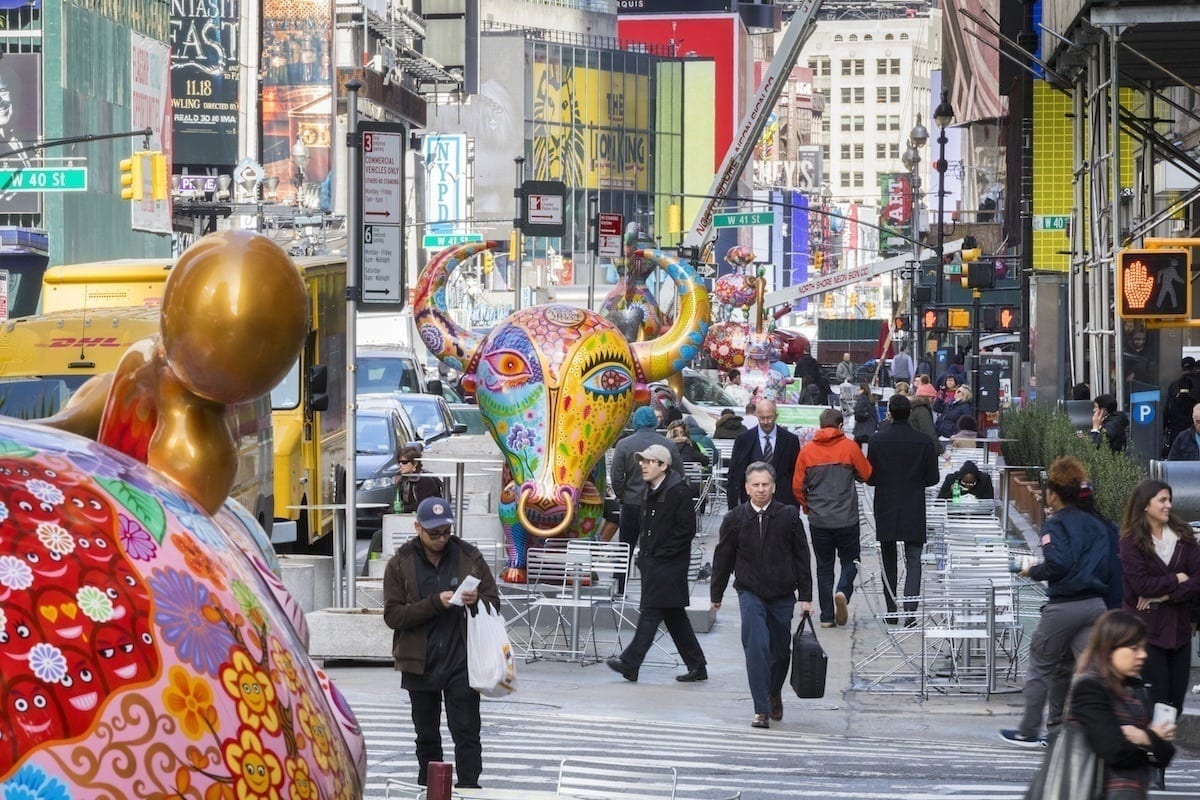 If you walked past one of the Garment District plazas in New York City last fall, you may have noticed those public art in the form of giant, vibrantly colored animal sculptures towering over sidewalks. Or perhaps you were running to catch a plane at Miami International Airport, and you glanced up to see an intricate web of etched glass on the roof of the bustling transportation center. How do artists find out, apply to and land public art commissions? While the process can be competitive, there are a variety of opportunities to across the country.

Public art programs were first launched in the United States in the 1930s, when President Roosevelt’s New Deal spurred the idea that Americans should take pride in their cultural treasures. The New Deal program Art-in-Architecture (A-i-A) developed percent for art programs, a structure for funding public art still utilized today. This program gave one half of one percent of total construction costs of all government buildings to purchase contemporary American art for that structure. Today, acquisitions also include specially commissioned art projects for public art spaces, and the percentage allocated from a new construction project typically varies from one-half to two percent.

In addition to percent-for-art programs, many cities allocate budgets for infusing their already existing public spaces with art. Many programs focus on time-based installations, which are temporary and span a certain length of time, though others make acquisitions of artist works for permanent installation in a public forum. Jerry Scupp, the Vice President of the Garment District Alliance, started the Alliance’s public art program in 2010 as a way to give the Garment District’s public plazas a cultural and artistic identity.

“People will usually have a visual that they identify with a particular neighborhood,” says Scupp. “In this case, what is it for the Garment District’s plazas? Because it’s a new space, it doesn’t have a character – people think of racks of clothing and textiles, but they don’t think of these plazas. So were trying to create a public identity that gives this neighborhood a different feel and impression through the artwork.”

The process for applying to and being accepted for a public art commission naturally varies from state to state and county to county, but the procedure usually follows the same structure. At the Garment District Alliance, Scupp typically issues a Request for Qualifications when he’s on the hunt for fresh new talent (See a sample form here). Though there’s no one set time of year that the Alliance is taking on new public art projects, the Request for Qualifications is typically published on the Alliance’s website, distributed through the New York Foundation for the Arts, and shared in Sculpture magazine and among local art world contacts. In addition, Scupp will sometimes contact an artist whose work he’s seen and admired, and encourage them to apply.

The Request for Qualifications asks artists detailed questions regarding their proposal, and requires artists to include a budget up to $50,000, CV, artist bio, and up to 12 images of their previous work. “We’re looking for artists that we know can operate in a public space because we know it’s quite different than being in a museum,” Scupp says. “The Request for Qualifications allows us to make sure the artist has the ability to produce the work, has experience in public realm, and has work that can withstand elements and fit in space.”

Once the Garment District Alliance closes its Request for Qualifications, Scupp and a panel of art industry professionals whittle down applications until they have chosen a select round of finalists. “We weed them out and get more detailed proposals,” Scupp says. “We have a committee and arts advisory panel from different arts organizations, and they review and give their recommendations. Then, we make our selection and we go to the City of New York, and if they approve it, we move on with art commissions.”

In Miami, the Art in Public Places program works similarly, signaling that the process for applying to a public art commission is relatively uniform across the country. Managed by Amanda Sanfilippo, the county-wide program manages all of Miami-Dade’s public art spaces, and issues a call for artists on their website: currently, Miami-Dade County has two open calls for public art spaces.

Miami’s Art in Public Places program reviews proposals by soliciting an independent Professional Advisory Committee, which makes recommendations for acquisitions to the Art in Public Places Trust. After establishing the nature and parameters of a given project, the PAC selection committee makes an open call for a Request for Qualifications or Proposal, and reviews all artist submissions and makes their assessments based on the artists’ aesthetic as represented in the slides and/or other visual materials. The PAC then makes recommendations to the Art in Public Places Trust that certain artists be selected or shortlisted. At this point, art commissions are made to develop a specific proposal for a project site.

Once an artist has been commissioned, they’re given additional information on the budget, site, and scope of the project, and often tour the site and meet with architects and other planners. The artist then returns to the PAC selection committee and presents his/her concept to the panel. Artists use a wide variety of means to communicate their ideas including blueprints, maquettes, drawings, computer-generated imagery and material samples, so knowing how to effectively communicate your idea using these techniques is an important skill.

In both the Garment District and Miami-Dade County, the selection process is ultimately left to an independent review board, but Scupp had some advice for artists who are thinking about applying for public art commissions anywhere in the United States.

“When we’re choosing artwork, we’re looking at how it’s going to react to the space, comparing it to what we’ve shown in the past, making sure it’s not the same types of materials or colors,” he says. “If I was an artist, I would look at the previous installation and see how you can continue this progression of finding new angles that will help create the identity of the venue. It’s not just a gallery space where you’re hanging paintings for a period of time, we like it to be reactive to this particular environment, and we’d like it to be something that’s thought-provoking.”

Logistically speaking, landing public art commissions can have a wide breadth of technical considerations for artists.”Artists have got to figure in shipping and installation costs, because these public art installations are often pieces that need to be brought from wherever they are, and often require special engineering to fabricate bases for installing and displaying them,” Scupp says. “Since these are works that belong to the artist and inevitably go back to them, we also ask they provide proof of insurance.”

On the flip side, the government agency issuing art commissions often provides engineering costs and an on-site engineer to facilitate the installation, as well as marketing support surrounding the installation and its subsequent display.

Still, it’s important to note that many times, artists are not personally compensated for public art commissions. Scupp notes that while artists do often request or outline a fee in their initial budget, there isn’t always enough public funding available to compensate the artist for their time. In fact, Scupp says that the overwhelming costs of installing public art often means that artists go over the allotted budget for the project.

“We certainly don’t want artists to lose money, but some people have lost money in their fabrication. Others have broken even, but I feel like they all come out ahead because of their impact on showing the work. You’re talking about over 50,000 people interacting with and viewing your work every day, so the exposure is a wonderful opportunity for many artists,” Scupp says.

In addition, its important for artists to be clear about the terms of their agreement when deciding to accept public art commissions. In the case of a temporary installation, it’s likely that the artist will retain all rights in the work. But if the installation is permanent, then an artist will likely have to consider whether they’ll retain certain rights in the work, such as the right to oppose the destruction of the work, or copyright protection in the work.

Ultimately, artists interested in landing public art commissions should pay close attention to government agency websites in an effort to keep track of open calls for public art commissions. If you choose to apply, consider crafting a proposal that directly addresses the architectural components of the space, bearing in mind the agency’s budget constraints and your own ability to stick to the budget you’ve laid out. And while its true that a public art project may not be the most lucrative commission of your artistic career, its lasting influence will likely impact it for years to come.

How to Get Work as a Travel Photographer
Comment