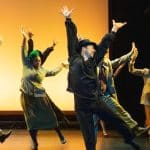 Grace Cho, CEO of Artrepreneur, talks with Jim Furlong, Director of Arts for the Hudson Guild, on pursuing a career in the arts, the challenges that follow, and being a well-rounded individual in order to hyper-focus on the things you love. Jim explains that art is the path toward achieving a fulfilled life and offers great advice on managing boredom, seeking joy, and having a sense of humor.

Jim Furlong has served as Director of Arts for the Hudson Guild since 1994. As director of the Guild’s resident theatre company, he has staged over 60 productions, including his original adaptations of Dr. Jekyll/Mr. Hyde, The Arabian Nights, Hamlet, Don Quixote, The Ring of the Nibelung, The Hip-Hop Misanthrope, Frankenstein, Duke Ellington’s Shakespeare Suite, La Pazza Vita (A Circus and Dance Show inspired by the films of Federico Fellini), J Ceez (aka Julius Caesar) and Around the World in 80 Days. As curator of the Guild’s two gallery spaces, he has mounted over 200 exhibits of visual artwork in all media. He also produces the Guild’s Performing ArtWorks! series – an annual concert series of performances and workshops for Guild participants by professional dance, theatre, circus, and music groups.

See also
Your Guide to Crafting a Compelling Artist Bio

Watch a brief history of the Hudson Guild here.
View a playlist of productions and gallery exhibits directed by Jim here.