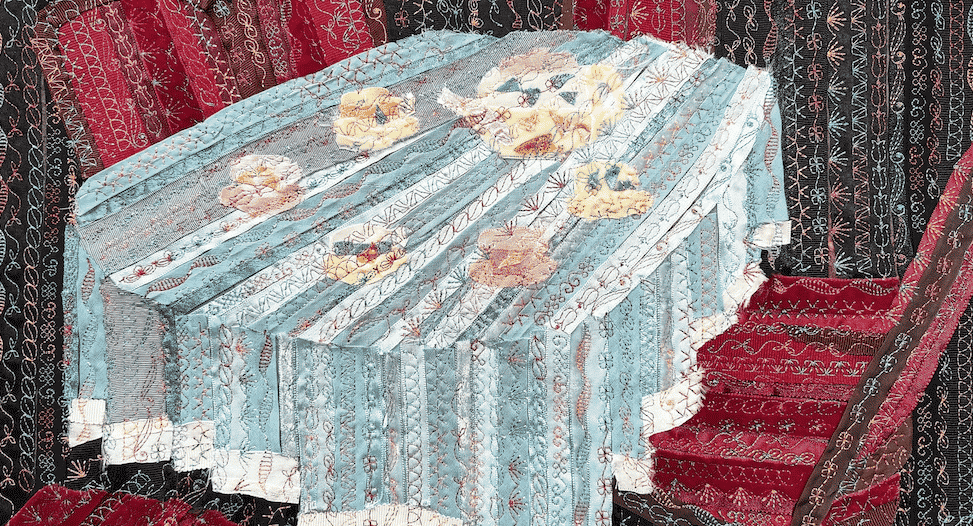 Share this!
The topic of fiber art is incredibly broad — which is one of the reasons I find it so fascinating to explore. Once you begin your own investigation, you’ll find artists working in weaving, quilting, papermaking, book arts, crochet, felting, and embroidery, and you’ll have barely scratched the surface. Then there are the material choices: natural and man-made, everything from cotton and wool to polyester and recycled metals and plastics to create a variety of forms, both utilitarian and decorative.
These objects range from the massive to the miniature, are displayed on floors and walls, hanging from ceilings, draped over other objects, are free-standing, and even wearable. I love fiber art that prioritizes aesthetic over function and focuses on the conceptual rather than simply the meaning inherent in the material. And if it does all that while maintaining a high level of craftsmanship? Then we’ve got a winner, as you’ll see in the winners of the Artrepreneur Fiber Arts Open Call competition by guest curator Jennifer Moss.

A tight-knit history of fiber art

My interest, in almost all things, stems from a love of history and the opportunity to learn about the evolution of a subject over long spans of time through the lens of several speakers. The history of fibers spans millennia, and evidence suggests the earliest forms of fiber work — clothing, baskets, and even nets — were produced by Paleolithic peoples over 27,000 years ago for warmth, storage, and hunting. These activities predate the written word by a cool 20,000 years. I believe we have an inherent, deep psychological connection to fiber because of this history and have been perfecting fiber art ever since.
Fast forward to the late 19th century and early 20th centuries: The Industrial Revolution had given rise to backlash from artisans across all handicrafts. The formation of the central tenets of the Arts and Craft Movement in Europe and North America began to materialize. The utilitarian objects previously produced by skilled labor, and perfected over those millennia, were now mass-produced commodities.
Over-ornamentation, fear of a loss of traditional craft skills, and a distaste for the division of labor created an explosion in high-quality, handmade goods where the maker was involved in both design and manufacture – fusing form, function, and decoration. These ideas were not limited to the West in an increasingly globalized world. The Mingei Movement in Japan sought to preserve and showcase traditional Japanese folk art, and the Slavophile Movement in Russia the quality and essence of medieval Russian art. The objects of this period were still very much about function, but there was a public resurgence in the handmade that is important to note.
Later in the 20th century, the second-wave feminist movement of the 60s and 70s brought new ideas surrounding women’s social and cultural identity into the milieu. The elevation of “traditional women’s techniques” and the inclusion of “women’s work” in the canon of high art via artists like Miriam Schapiro and Judy Chicago pushed against established boundaries and redefined what art could be. The traditional gave way to the contemporary.
Aesthetics and conceptuality became the focus, and the same high-quality, handmade objects were now imbued with subtle (and at times not-so-subtle) metaphor, emotion, and personal experience. The floodgates were opened – the 80s and onward saw the expansion of material choices, the widening of craft vocabularies, and the creation of ever more conceptual works that would tackle gender, sexuality, and politics in the latter half of the 20th century.

Got you hooked? Join the club. For those interested in collecting fiber art, there are three main factors that I think make a work stand out relative to the discussion above.
Is it well made? Fiber is a form of craft and, as such, cannot escape its connection to labor and process. A high level of craftsmanship (unless intentionally poor for conceptual reasons) is the first thing I look for. Linda Iverson’s “Table Set for Tea”, pictured above, is a beautiful example of quilting in this regard. And as I’ve said elsewhere, the detail in this piece makes my heart work hard.
Is it doing something unique? Certain fiber-related forms evoke long-standing associations. Is it on the ground when it should be on the wall? Is it metal and plastic rather than wool and silk? Is it masquerading as something else entirely? When they don’t conform, they surprise. Pamela Palmer’s “Visit Florida River of Grass” does this for me on so, so many levels. I’ll let you work it out for yourselves.
Is it conceptually interesting? In the end, art is about making meaning. We live with it in our homes and what we choose speaks to us in deeply personal ways. If the artist hasn’t been explicit, what does it say to you, and how does it make you feel? If they’ve explained their ideas and thoughts,  do they resonate with you? Felicia Murray’s “Our Dying Reefs” checks all my boxes: wearable, yet far more aesthetic than functional; the mask’s association with sickness and the sickness within our coral systems; and the color choices that evoke bleached reefs created with ocean seaweed and plants.

A hill I’m willing to dye on

Craft is on the rise, baby! I believe that we are currently living in another public resurgence in the handmade. The internet of things has brought everything to our fingertips, and I think folks are tired of all the ephemera. I know I am. My wife and I seek out the unique, the handmade, and the discarded in our household. We frequent artists’ and makers’ markets, and they are always packed. There is clearly a very robust demand and a supply to satiate that hunger. Finally, if I’m going to buy a thing, I’d rather pay you for it than Jeff Bezos.

What’s your connection to fiber art? How do you celebrate the handmade in your home? Let us know in the comments.

Kevin Clancy received an M.F.A. in painting from the Savannah College of Art and Design, Savannah and a B.A. in visual arts from Bethany College, West Virginia. He explores political meta-narratives in his art practice using loaded symbols such as the United States flag as a discussion of social, cultural and ethical systems. Clancy has exhibited his work nationally at galleries in Massachusetts, West Virginia, Georgia, Texas, Rhode Island, Pennsylvania and Oregon. He currently lives and works in West Virginia.