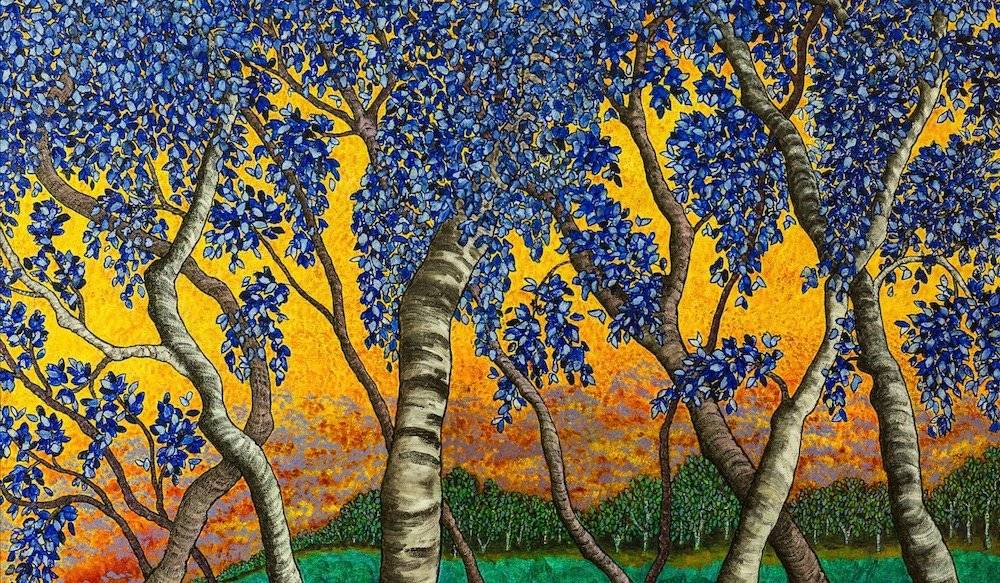 Did you know that until relatively recently blue pigment was very rare and expensive — making blue artworks all the more valuable? Before synthetic paint, paints used to be made with crushed minerals and semi-precious stones.

In ancient Egypt, the first synthetically produced paint involved a complicated recipe of limestone, sand, and minerals containing copper that easily went awry, though it remained popular through Roman times. “True blue” or ultramarine was made with lapis lazuli, which was not easily accessible in Europe during the medieval period. As a luxury color of high value, ultramarine blue during the Renaissance was often used to depict royalty and religious figures, including the robes of the Virgin Mary by Raphael. Artists like Johannes Vermeer would go into debt to get their hands on the color, which was often more expensive than gold. It was not until the mid-19th century that synthetic blue was made and became more widely used in paintings.

Blue is a primary color, so there are no colors you can mix to make blue. Until the pigment’s widespread availability, if you did not have access to the color blue, you had to create the illusion of blue by making all of your colors warm (with yellow or red), and then allowing the “blue” to be a cool color in comparison (no yellow or red added). I give those artists a lot of respect! Imagine what it was like to be an impressionist painter in Europe and finally have access to an affordable tube of blue paint. It must have felt like the possibilities were endless.

Today, artists can choose a variety of hues, all with different meanings. Some find blue soothing. For others, it evokes sadness. You’ll find all of these applications and more about the winners of Artrepreneur’s Big Blue Open Call Art Competition. First, a little background.

In contradiction to the extreme limitation around lapis lazuli, I think of an artist whose name became synonymous with the color blue: Yves Klein. During his career from 1957 on, Yves Klein developed “International Klein Blue,” which is an ultramarine blue suspended in a synthetic material that allows the saturation of the color to not be interrupted by the medium. He was famous for painting canvases solidly in this color and claiming them to be fine art. He also claimed that the sky was his largest work of art. I have not known of another artist who expressed himself or herself so fully through the use of a single color. Klein spoke of his obsession with the color in this way:

“Blue is the invisible becoming visible. Blue has no dimensions, it is beyond the dimensions of which other colours partake.”

An understanding of science backs up Klein: Blue light has the shortest wavelength and highest energy of any color. That means when light hits an object, blue is the first color that is reflected back. The scattering of the color when sunlight hits molecules in the air is why the sky looks blue during the day.

The latest historical reference to blue is more recent and is a specific painting, America’s Most Wanted, by Vitaly Komar and Alexander Melamid. Komar and Melamid were immigrants to the USA who asked Americans what they wanted to see in their artwork. The majority who were polled said that they liked art that was mostly the color blue — meaning blue wins this country’s popularity contest. They then proceeded to include all of the most popular features of art (landscape, famous historical figures, animals, etc.) into a single painting. If we are using logic, they should have created the world’s most popular painting. It’s a humorous bite at the art market and our taste in art.

Blue has been rare and expensive, it has defined an artist’s career, and it is America’s most popular painting color. Not a bad résumé for blue.

The many meanings of blue artworks

Colors hold a lot of emotion and connotations for people. For many, blue can be uplifting and vibrant, a positive color. Honorable mention Shawn Marshall in “Bullfighter’s Dream” uses the color in the series meant to evoke “a sense of wonder and hope for the future.”

But blue is also associated with sadness and depression, as in Pablo Picasso’s Blue Period, when the artist first moved to Paris at the turn of the 20th century and was down on his luck. He painted almost exclusively in monochrome blue to reflect his melancholy. Honorable mention Villanous Varnishes also plays with feeling blue as a figure of speech in “Case of the Blues.”

In my own artworks, I love painting things that are bright red or saturated warm colors. The perfect way to really make those hot colors jump off the canvas is to accent them with blue. The use of complementary colors to create contrast has been used by artists for centuries to make our eyes linger on the artwork, and I employ this technique to make my still-life paintings dynamic.

For this open call, I tried to put my personal feelings and biases aside in order to concentrate on what I thought the artist was trying to communicate with that color. For example, with Patrick Chuka, Blue is Patience because one, the title of the work is “Patience,” but also because he did that drawing with a ballpoint pen. There are many faster ways to draw than with the tip of a regular office pen, and yet, the title mimics the execution of this particular drawing.

I had a similar experience when looking at Azad Mariam’s sculpture. The title of the sculpture is “Dreams,” and the woman has a tear on her head. Out of that tear is dripping, maybe leaking, a blue stain.

When it comes to words, and the naming of colors, I could not get the phrase “royal blue” out of my head when looking at Kae Sasaki’s images of the grand Opéra Royal de Versailles.

View all of our Big Blue Open Call winners below.

Blue is opulence. Featured above, Kae Sasaki explores the question: What is art without an audience? Similar to the question “what is the sound of one hand clapping?”, this is a philosophical question that will have different answers from different people. Sasaki examines her own point of view through a metaphor of architecture, by painting the grand Opéra Royal de Versailles without its esteemed guests. Who is this luxury for when no one is inside? Sasaki’s use of such an opulent interior brings two very different thoughts to my mind: art without an audience is wasteful, or the beauty of art is in the making. A testament of a good artist is leading us to a conclusion without making it for us.

Blue is patience. Patrick Chukaproposes to us in his drawing that in order to establish a connection to our surroundings, we have to slow down in order to notice them. In particular, if we don’t make an effort to connect with nature, we will simply pass by all it has to offer us. This philosophy (or fact) is referenced in the flowers, which take time to bloom, and a butterfly which takes time to transform from its caterpillar stage. The real test of patience? Chuka has executed this beautiful drawing with a ballpoint pen. As a frequent doodler, I give much praise to Chuka for the skill and patience it takes to work in this medium.

Blue is the color of dreams. In “Blues Dreams” by Azad Mariam, a porcelain bust of a woman is torn open in the back and blue ink leaks from that tear onto her face. I love thinking about how dreams can “tear” open the fabric of our reality in our brains, but then those dreams can affect who we are and how we perceive the world. Like ink spilling onto our faces, our dreams can leave permanent marks on us. There is also a feeling of expansiveness in Mariam’s work. Yes, the shape of the bust is interrupted, but it is also spreading beyond normal boundaries in directionless and organic cloud-like shapes.

Blue is isolation. It is a widespread fact that the blue light emanating from the screens on our phones or computers interrupts our sleep patterns. And yet, with a pandemic still affecting our lives, and dating apps being so popular, the temptation to go to bed with our phones can be irresistible! Far from looking like she is suffering, the woman in this painting, “Dating a-la Mode I,” by artist Elizabeth Brooks, looks content. Something impossible to ignore is the fact that the artist chose to represent this woman not on a date, but alone, entertaining herself with her phone. This painting does sum up a paradox many of us acutely felt during the early years of the pandemic: being connected (online) to so many people, and yet still being very much alone in reality.

What hue do you choose? What are your favorite facts about blue? What feelings does blue evoke for you? Let us know in the comments below.

Jordan Baker (b. 1981) is an artist and curator living and working in the Hudson Valley, New York. Jordan was born on a naval base in Winterpark, Florida. She attended Tufts University, and received a BFA in Art History from Syracuse University, and an MFA in mixed media from SUNY Albany.