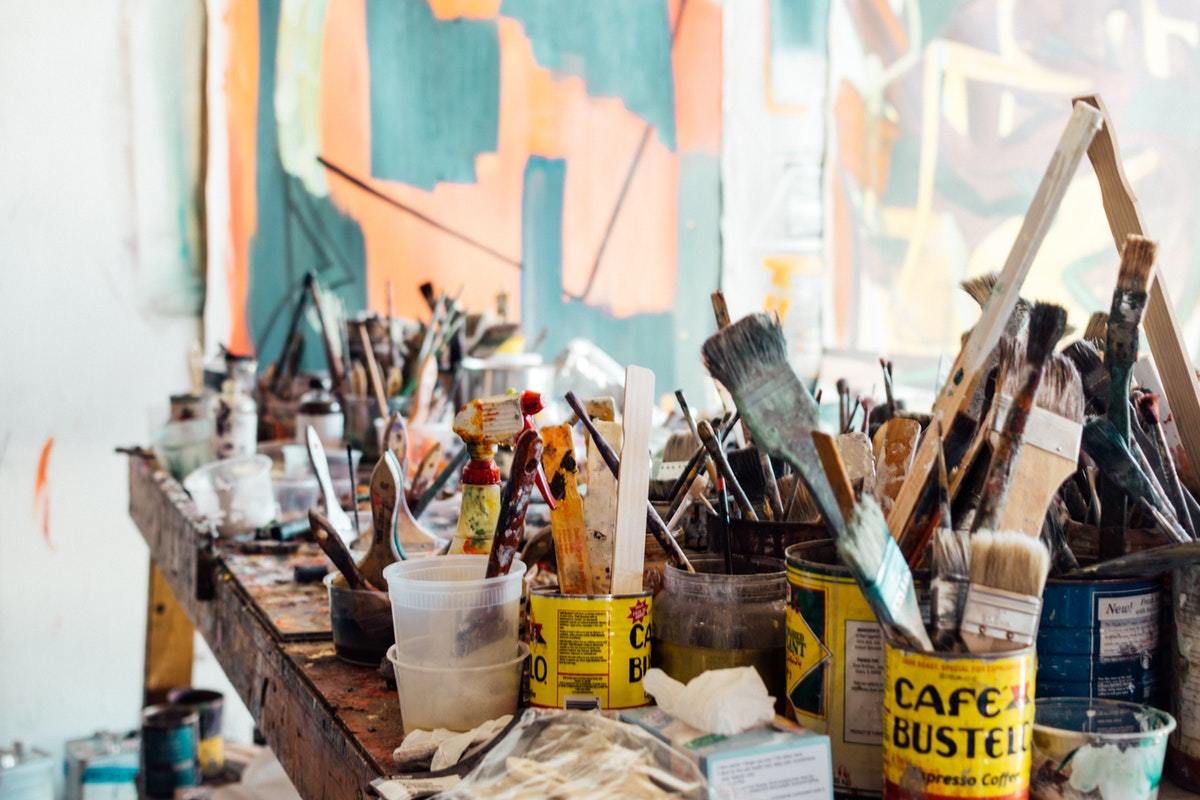 There are many things to consider when choosing an artist studio or workspace, and where an artist sets up shop will have a major impact on their work. We spoke with Shannon Stuart, a jewelry entrepreneur, and Amy Cotton, the manager of Vancouver’s Beaumont Studios, to understand what to look for and what to watch out for when choosing art studio spaces. We determined which amenities artists should look for in the physical space, as well as what they can expect from their studio neighbors and landlord, building or property manager.

Set Priorities for Your Art Studio

Because of the amount of time you hope to spend at your studio space, finding an artist studio is like looking for a second home. But depending on the real estate market where you live, you may not have the luxury of being picky. “I would say be open to sharing first of all. We cram as many artists into our studio spaces as we realistically can fit. So be open to different kinds of arrangements,” says Cotton, who manages 40 studio spaces occupied by 100 artists. If you’re considering a studio-mate, read The Pros and Cons of Sharing an Art Studio Space.

While Cotton says choosing what to prioritize “really depends on the artist and what their medium is,” she notes that “lots of artists are looking for windows and ventilation, and airflow tends to be quite important regardless of the medium.” Access to power for art tools is also key.

If you set your own schedule, you know what time of day you create your best work, so it’s important to that you have access to your studio space during that time. Most art studios provide tenants with 24-hour access, however creative co-working studio spaces will vary. “Artists tend to work at odd hours so having 24-hour access is quite important,” says Cotton.

Stuart, an independent jeweler, says the “ability to modify the space” is important to her as well as safety and security because she works with expensive equipment.

If it’s a long commute to your art studio, or not near public transportation, it might be difficult to get to your studio regularly. Make sure the studio spaces you look at are located in safe and accessible areas and determine whether it’s an easy commute. Shannon Stuart rents a studio at Parker Street Studios in Vancouver’s East Side, where she creates jewelry for her company, adorNation. She found the studio space through another artist and says the location is ideal for more than one reason. “It’s really close [to home], I typically walk here,” she says, adding that the 30-minute walk to and from the studio helps both her mental and physical well-being. However, Stuart also likes that she’s close to public transit and her suppliers downtown. “I find it really easy to get downtown,” she says.

Other things to consider regarding location of studio spaces include how you will commute during different seasons, and whether there’s readily available parking, bike storage, and public transit. You will also want to think about traffic. For example, a studio on the other side of town might be reasonable if there’s an express bus or freeway, or if you can schedule your commute to avoid rush hour traffic.

Building and studio safety is important when considering where to rent studio spaces. Ask about fire escapes, sprinklers and city permits. While it may be a challenge to find a space that is properly permitted and up-to-date on fire safety inspections, sticking to this requirement could save your life (as evidenced by the 2016 Oakland Ghost Ship tragedy where 36 people died in a fire).  CERF+ has a great Studio Safety section and guide on its website with checklists to help you think like a building inspector.

Getting down to the details of your studio spaces, it’s worth asking current space users about noise levels, ventilation, electric hook-ups, and temperature. While the working artist wants to consider how noise from others will affect them, it’s also important to consider whether the noise they make will be tolerated by others. Depending on the medium, a relatively noisy space could be a good thing because it might signal that your studio neighbors tolerate noise.

If you’re working with odorous materials, it’s important to ask about ventilation. Do windows open? Many old buildings have poor insulation and no air conditioning, so you’ll want to consider whether a fan during the summer and a space heater during the winter will be necessary and if so, whether they will be enough and safe to use in the space.  (also ask who pays the electricity bill, because space heaters add up). Furthermore, the direction your windows face will impact heat because of sunlight.

Stuart knows this struggle first-hand. During the summer, the old building housing the Parker Street Studios heats up. “Typically I adjust my schedule and I come in early,” to avoid the mid-afternoon heat, she says.

As a studio property manager, Cotton knows the ins and outs of leases and the landlord-tenant relationship. While legal responsibilities and the rights of tenants vary by country and state, Cotton recommends that artists sign (at least) a one-year lease, reviewed by a lawyer, for their studio spaces to protect your artwork and business. Also consider other important considerations, such as insurance. “Signing a one year lease provides a bit of stability, and a chance for the artist to focus on their studio practice,” she says.

The Beaumont Studios, which Cotton manages, is a non-profit arts organization that provide studio spaces to professional artists. Beyond the individual lease, Cotton recommends checking to see whether the management company or organization has a long-term lease on the building as a whole. For example, Beaumont Studios currently has a 10-year lease on their building.“When artists are worried about losing their space and moving and they have to pack everything up and get to another location that can detract from the process, and a lot of artists who are just starting out need to focus on what they’re doing so their work can evolve.”

Be Near Other Artists

Visual artists, in particular, often work in isolation in their art studios. That’s why being near other artists is a good idea. You have a support system, motivation to make work, and a built-in network. Cotton and Stuart both emphasize the importance of working near other artists.“Something that’s really important in our arts organization is a sense of community,” says Cotton. “Lots of artists want to be involved in an organization that’s bustling, that has common spaces where they can showcase their work. “Some studio spaces require a certain level of involvement in the community from their tenants, while others provide opportunity but don’t make it mandatory. And whereas the rent for some studio spaces covers cleaning, at non-profits such as the Beaumont, it’s up to the tenants.

“We’ve formulated a volunteer maintenance committee,” says Cotton. The artists “collectively decided that keeping the space clean and acceptable was really important to them because they want a professional atmosphere for their clients and customers when they come to our spaces. . . [so] our common spaces are actually quite tidy considering how many people use them.”Over at the Parker Street Studios, Stuart says there aren’t many common spaces in her building, but that suits her well. “I’m quite a solitary artist,” she says. However, she likes having a studio in a building with other artists and often talks with her studio neighbors.

Knowing your art studio needs and priorities, being realistic and willing to compromise will make looking for a studio less of a hassle as you visit space after space. When spaces are scarce, you may find that window with natural light adds an extra $200 to your monthly rent.

What’s your strategy for finding new studio spaces? What are your lessons learned and what is you art studio situation now? Let us know in the comments!

Tess Vikander is a multi-media freelance reporter and writer who was raised by several courageous artists in an old house. She covers arts, social movements, urban stuff, LGBTQ politics, and indigenous resurgence. Follow her on twitter @tessavikander.